I have just been honoured with the presence of a new spirit animal and I have to say I am quite blown away, because in a sense, this animal is new to the Earth, and according to accepted scientific knowledge, shouldn’t even be possible! They came in a shamanic dream, I saw them above me, two strange looking bears, they were off-white with long necks and exuded a ferocious power. I ‘knew’ straightaway that they were the polar bear/grizzly hybrids known as Grolar Bears, or the term I like best, Nanulak, a word combining the Inuit-language words for polar bear and grizzly, nanuk and aklak.

These bears should not exist because in theory it is not possible for the offspring of two separate species to reproduce and the grizzly and polar bears are absolutely distinct species. The offspring of a lion and a tiger for instance cannot reproduce, yet for some reason these bears can! The result is a truly amazing bear, having the long face of the polar but the hump of a grizzly, the giant claws of a grizzly but with a degree of hairy under-paw like the polar. Polar bear hair is hollow, resulting in the illusion of it being being white due to the diffusion of light, however the skin of this ‘white’ bear is actually black! The hair of a grizzly is solid and again, the Nanulak combines both these features on various parts of its body, resulting in a sort of dirty looking bear.  It seems that climate change has caused the normally different ranges of these bears to begin to overlap, as polar bears, normally preferring the ice, travel farther inland as the ice is disappearing. What we are really looking at is a bear that is between worlds and perfectly adapted to survival in a new world that is emerging. I find the spiritual message of the Grolar Bear to be very relevant to shamanism today. The state of consciousness of the planet is resulting in more and more shamans emerging in non-shamanic cultures, this is down to the shamanic spirits and beyond any concepts of race or cultural mis-appropriation.  This makes sense, since most of the problems in the world stem from western culture and change needs to come from within that culture if things are to get better and shamanism has a role to play in this. We are seeing the universal truths of shamanism being expressed by those emerging as shamans in the West through direct initiation by spirits. The polar bear was the first initiatory animal to come to me, the connection I believe is that all living polar bears trace their matriarchal DNA back to a handful of bears in what is now Ireland! At the end of my dream a voice shouted, Come on the bears! and many bear cubs ran towards me. I see these cubs as the new shamans, like the Nanulak, a new being born to cope with a changing environment and changing times. Perhaps seemingly impossible to many, but real nevertheless, they are here, the new shamans are here! 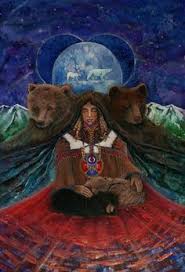 I'm an Irish musician, composer and author. My harp CD, Cumha and my book, A Shamanic Kundalini Awakening are mutually complimentary expressions of my spiritual path. View all posts by Maverick Angel